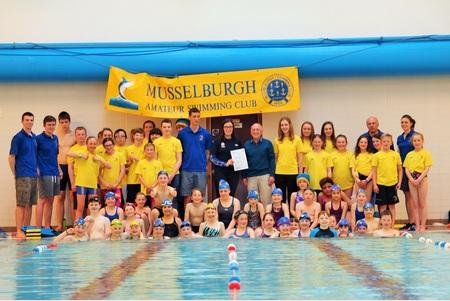 THE Musselburgh Marlins have made a big splash after receiving a top swimming benchmark.

They were recently presented with a SwiMark certificate, part of a Swimming Scotland accreditation scheme which provides a nationally recognised standard.

Jack Calder, 74, chairman of Musselburgh Amateur Swimming Club, better known as the Marlins, said: “When Scottish Swimming came and looked at what we were doing, we had to conform to certain standards of excellence and best practice. When they looked at us very closely, we were about 80 per cent of the way there. We just had to bring our constitution up to date.”

The club has come a long way since its origins back in 1886, when swimmers used to hone their skills in the local harbour.

The pool at Loretto School was used over the years before the club moved to Musselburgh Sports Centre after it opened in 1995.

Mr Calder became chairman seven years ago when his daughter was offered extra coaching at Musselburgh as she takes part in disability competitions.

He said Musselburgh, which welcomes swimmers aged six to 18, had now returned as a force to be reckoned with as a club, adding: “The competitive side of the club has improved dramatically.”

The Marlins are winning medals at both club and east district level, which covers Fife, Edinburgh and the Lothians, as well competing in the Lothian Leagues and Haddington Total Swimmer League.

Mr Calder puts the success down to several factors, not least the coaches at the poolside. They include head coach Cameron Smith, 23, from North Berwick, who went through the East Lothian swim system, competing with Dunbar, Haddington and East Lothian before swimming for Edinburgh University.

He stressed that club membership was also on the increase, adding: “Our membership had fallen to about 50, but we are now back at about 85. We could take 100, so anyone interested should get in touch via our website.

“It’s all about good coaching, great support from the parents and absolutely super children.

“We also have social events such as an annual quiz night and fun nights.

“We are keen to get the swimmers competing and getting fantastic results, but we are also very keen that the come to really enjoy their swimming.”

The club is now hoping to go on to achieve the SwiMark plus award. Mr Smith said: “We are very proud at achieving the swiMark accreditation. It shows what we have known for a while – that we were at the level, but it is recognition from Scottish Swimming that we have that quality standard.”