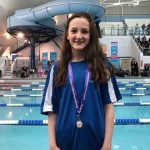 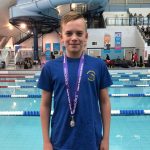 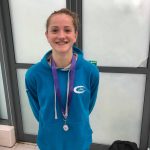 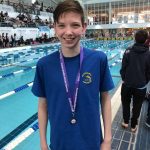 SWIMMERS from East Lothian produced stunning performances to claim eight medals at the Scottish Schools Championships in Glasgow on Saturday.

There was another Scottish 11-years’ age group record for Tranent’s Stefan Krawiec, who broke the long course record for the 50m butterfly by 0.36 seconds to take the gold medal.

East Lothian Swim Team (ELST) members got the day off to a bang with a silver medal for Iona Wilson in the 13/14 years’ 100m butterfly, which was followed by a series of bronze medals.

In the afternoon, Krawiec’s record-breaking swim was the highlight.

Elsewhere, Grace Courtney picked up ELST’s second gold of the meet, again in the 12/U 50m butterfly in a new personal best time.

Luke Hornsey rounded off the medal haul with gold in the 12/U 50m freestyle, also in a personal best time.

Bruce Halloran, ELST head coach, said: “This was our first competition of the long course season, and the results are very encouraging.

“We now set our sights on the East District finals, which will be taking place this weekend at the Royal Commonwealth Pool, Edinburgh.”

Halloran was also pleased to see the team’s progression from a year ago, when they won five medals.