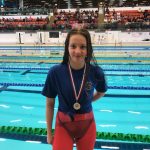 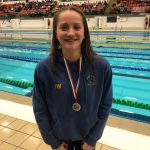 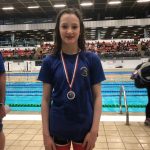 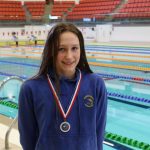 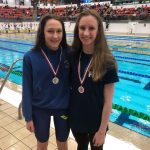 COUNTY swimmers won more than 40 medals at the final round of the East District Championships at the Royal Commonwealth Pool, Edinburgh, at the weekend.

The 11-year-old smashed previous best times in the 200m individual medley (IM), 50m backstroke and 100m butterfly to add to his haul of age group records.

He was also named best boy for his age group, while Haddington’s Edward Alsop won the corresponding award for his age category.

Bridget Lemasurier completed the first day of racing with silver in the girls’ 16-years final.

On Saturday, Krawiec took gold in the 11/12-year-old 50m breaststroke, the Windygoul Primary School pupil going on to win golds in the 100m backstroke, 50m butterfly and 100m freestyle.

Hornsey picked up silvers in the 50m butteerfly, 100m freestyle and 100m backstroke won by Krawiec, in which Peebles was third.

There were bronzes for Sean Craigmile in the 15-years’ 100m backstroke and 100m freestyle and Grace Courtney took silver in the 11/12-year-old 50m butterfly, while Iona Wilson took bronze in the 14-years’ 50m butterfly.

The evening was finished off with a fine swim from the Tranent quartet of Krawiec, Peebles, Harvey Orr and Findlay Brown, who clinched bronze in the 11/12-years’ 4x50m freestyle relay.

On Sunday there were four more gold medals for Krawiec: in the 100m front crawl, 50m backstroke, 100m butterfly and 50m freestyle.

Hornsey added to his tally of silvers in the backstroke, butterfly and freestyle and the ELST medal rush continued as Ballantyne took 100m breaststroke bronze.

Lemasurier and Russell once again contested the 50m breaststroke final and again won gold and bronze medals respectively, as Stoddart continued her excellent form with a bronze medal in the same event at 13-years.

The final individual event was the 50m freestyle, with Ballantyne and Craigmile taking one bronze each, while Porteous took gold in the 13-years.

And the Tranent relay team reunited for the 200m medlay relay and claimed a fine silver.

ELST head coach Bruce Halloran said: “To come away with 46 medals is a huge return. I’d like to say a massive thank you to all my fellow coaches from across East Lothian for making the weekend such an overwhelming success.”

He offered “huge congratulations” to Suayngam for his trophy.