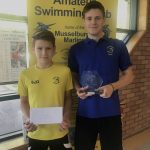 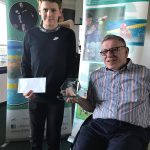 Sam (MASC/ELST Development Squad/Lothian Racers) received LDS’ prestigious Jim Anderson OBE Bursary which is given to the Performance Athlete of the Year, within the Edinburgh and Lothian region, demonstrating considerable potential in their chosen sport and is recognition of the huge successes Sam has achieved in the pool at British and International level over the season.

Danny (MASC/ELST) was awarded Coach of the Year in recognition of his continuation of MASC’s inclusive approach in welcoming swimmers with a disability to the Club and the tailored coaching provided to them, in addition, to his services to Para-swimming including attendance as a coach for the SDS East of Scotland Squad and as Assistant Scotland Squad Coach to recent British and International Championships.

Modest Danny is first to point out that his success is down to the hard work of MASC’s Scotland Squad Para-Swimmers Dylan Bleakley, Neil Ferguson and Sam Downie.

Our dearly departed Chairman, Jack Calder, was also recognised in the opening address from Lothian Disability Sport’s Chairperson (Helen Bruce) and was warmly received by the attendees.

The link below gives more detail about the dynamic duo’s Awards and achievements – http://www.lothiandisabilitysport.co.uk/news/lds-agm-annual-awards-night-2019.html

Keep up the great work and hugely deserved!