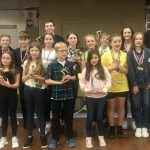 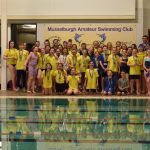 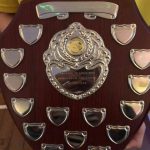 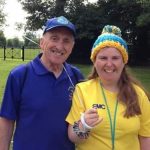 A trophy in memory of Jack Calder – the much loved chairman of Musselburgh Amateur Swimming Club – has been presented for the first time.

The Jack Calder Memorial Shield will be given annually to swimmers considered by the coaches to continuously demonstrate the core values of the club including dedication, commitment, support of others, respect, kindness, trainability and effort.

Mr Calder was chairman of MASC, also known as Musselburgh Marlins, for more than nine years until his death on June 5.

He was recently presented with a posthumous award, the Elspeth Watson Trophy, for his “significant contribution” to disability sport at the recent Scottish Disability Sport (SDS) annual award ceremony in Stirling.

The Marlins’ new trophy was awarded at the club’s annual presentation night at Our Lady of Loretto Church Hall following the club championships which were recently held at Musselburgh Sports Centre.

Scott Radley, 11, and Bridget Lemasurier, 17, both from Musselburgh, were named joint winners.

Present to see the trophy awarded was Mr Calder’s daughter Sarah, a member of Musselburgh Marlins.

Head coach Danny Kirkham said Scott had “made huge strides” in the bronze squad and, within a few months, had moved to silver.

He added: “Scott is one of the most consistent attenders who gives his best at every session. His manners and politeness are admirable and he is a huge influence to those around him.”

Danny explained that from day one Bridget, who has been a MASC member for more than eight years, has demonstrated all club values.

He added: “She is the best role model the club could ask for and is a pleasure to coach. Her dedication and commitment has seen her reach national success on multiple occasions. We are incredibly lucky to have someone like Bridget in our club.”

Gill Downie, who has been appointed club president, said: “The management committee wanted to ensure that Jack was remembered by the club’s members into the future and felt it fitting that, on an annual basis, the Jack Calder Memorial Shield would be presented to the Musselburgh Amateur Swimming Club swimmer(s) considered by our coaches to continuously demonstrate the core values of our club.

“It is vitally important that we remember the incredible work, time and effort Jack dedicated to Musselburgh Amateur Swimming Club and his values, despite the club’s growth, continue to underpin the family community that bonds us together to ensure MASC’s continued growth and success.”

Swimmers are seeded and swim based on their fastest times in three separate age categories: eight and under; nine-12; and 13 and over. Medals are awarded to the three fastest swimmers in each age group.

To add to the occasion, MASC coaches took part in a relay race against some of the top club swimmers with the help of Paralympian Stephen Clegg who made a guest appearance.

“Our coaches were delighted to see the skills and techniques taught in training on show in the pool as each swimmer aimed to improve their personal best times and battled to achieve top medal positions in their respective age groups.”

Trophies for the top boy and top girl in each age group were awarded at the presentation night as well as three handicap race trophies. Medals from the recent East Lothian Distance Championship were also received by club members.

Lynn Stevens, the club’s STO (Swimming Technical Officials) co-ordinator, is to take over the role of secretary from Gill.