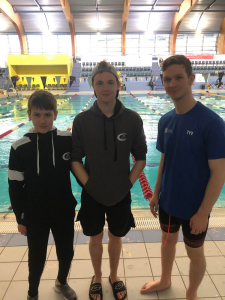 Dylan Bleakley and Neil Ferguson competed in the 17-18 years age group, while Sam Downie who recently turned 14, moved up to the 14-16 years category.

They joined 14 swimmers from seven clubs to travel with the Scotland squad for the meet at Sunderland Aquatics Centre recently.

Bleakley and Downie also train with East Lothian Swim Team and its age group squad coach Jamie Ward, accompanied the group as one of the Scotland squad’s coaching team for the first time.

Bleakley enjoyed a superb championship, winning silver in the men’s 100m backstroke event with a time of 1m08, bronze in the 100m butterfly and placing in the top six for his remaining events.

Despite moving up to a new age group, Downie marginally missed out on bronze in the 400m freestyle by only two British Para-Swimming Points (BPSP) – points awarded to each swimmer in relation to how close they are to the world record for their classification – and was placed a respectable fifth and sixth in his 100m backstroke and 100m freestyle, and placing 10th and 11th in his remaining two events.

Ferguson had three impressive top-10 placings out of his four events, with the highlight being a strong sixth place for his 50m freestyle.

Numerous personal bests were celebrated by the swimmers across the weekend.

Paul Wilson, Disability Performance Development Manager at Scottish Swimming, said “The meet was a great opportunity for some of our younger athletes to work on their race preparation and execution. There were some great swims from the group, aided and supported by a great coaching team. I was really pleased to see the youngsters step up to the challenge.”

Danny Kirkham, Head Coach with MASC, also known as Musselburgh Marlins, said: “I was delighted to see our boys compete so well against some very tough competition from across the country. This meet was a fantastic opportunity for gaining valuable experience and all three boys stepped up on the big occasion and achieved lifetime bests. Neil, Dylan and Sam represented themselves and MASC exceptionally well and have done us proud as ever.”